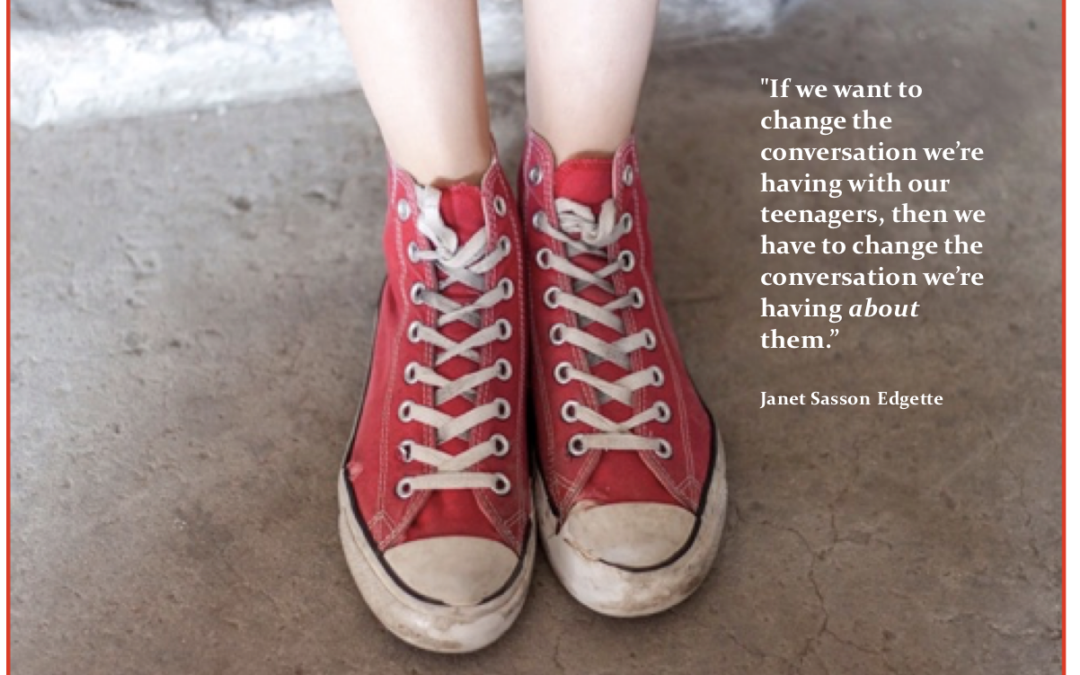 With a wink of the eye and a shared smirk, parents across the United States trade in their collective anxiety about raising teenagers for the comfort of believing that they are not alone, that it could not be anything butexasperating. Kids are hard-wired to be difficult once they reach adolescence, we all reassure one another. It’s those hormones, you know—puberty and all. It just makes them crazy…

Well, hold on a sec, and let’s unpack this storyline about adolescence that gets handed down generation-to-generation and see if we really want to keep it going. Is it true? Was it ever? Does it help or hurt the relationships we try to have with our kids? For the most part, the words we exchange among ourselves about teenagers are not particularly becoming of them. They’re called irresponsible and moody, said to be rude and self-absorbed.

The idea that adolescence is this mystifying phase of life during which children become unrecognizable to their parents and insufferable to rear is woven into the fabric of our culture. Consider this brief exchange between Tom Wingo, a depressed and disenfranchised football coach from South Carolina and the narrator of Pat Conroy’s novel The Prince of Tides, and Dr. Lowenstein, his sister’s psychiatrist. Tom has just insulted Dr. Lowenstein’s parenting of her adolescent son, Bernard.

“My failure to be a good mother for Bernard is a constant torture, Tom,” she said.

“You’re not a bad mother. Bernard is a teenager. Teenagers are, by definition, not fit for human society. It’s their job to act like assholes and make their parents miserable.”

This is supposed to be funny, and maybe it is when you’re reading the book. But looking at it out of that context, it’s like, Holy cow, no wonder there are such problems between parents and their teenagers if that’s how we think about them! Can we afford to be this complacent about the way we talk about teenagers in our culture when so many parents and adolescents struggle to be understood by and connect with one another? And is this really the narrative we want to the next generation of parents—our children—to inherit?